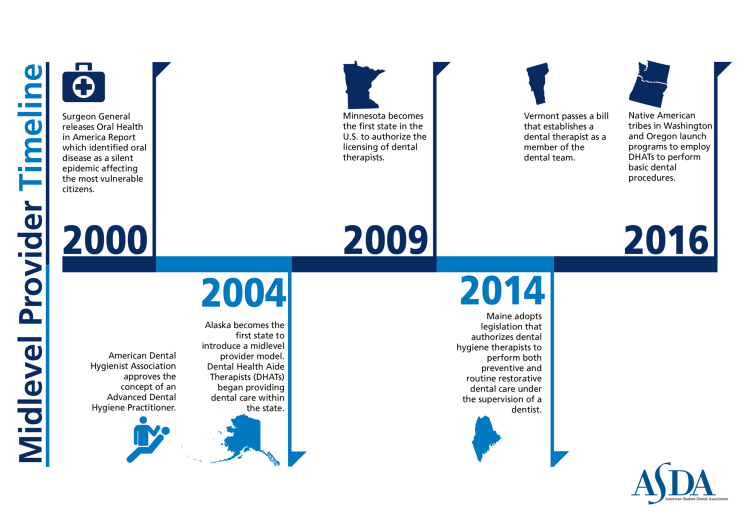 What are dental therapists?
Dental therapists are trained to provide a limited number of diagnostic, preventive, and restorative dental services, including patient education, dental exams and screenings, x-rays, fluoride treatments, cleanings, sealant placement, fillings, and simple extractions. In some states, dental therapists can perform pediatric pulpotomies. Furthermore, dental therapists are permitted to supervise dental assistants and dental hygienists. ASDA defines a midlevel provider as, “An individual, who is not a dentist with four years of post-collegiate education (three years in the case of University of the Pacific School of Dentistry), who may perform irreversible procedures on the public.” ASDA’s definition has two unique points of emphasis: midlevel providers do not receive the traditional dental school training of dentists, and midlevel providers can perform procedures that previously only dentists have been allowed to perform.

Oversight of dental therapists
Dental therapists must practice under the supervision of a licensed dentist. They are also limited and restricted in their delivery of care through a written agreement under the supervising dentist. The agreement clearly defines almost every aspect of dental therapists’ care, including the procedures they may perform, practice settings, and patient populations served, as well as any limitations on the services based on procedure-specific or patient-specific factors.

Dental therapists in the US
Access and cost barriers are the two main impedances to receiving dental care in the US. Access barriers could include living far away from the nearest dentist or not having a means of transportation to a dentist. Cost barriers include not having dental insurance, having inadequate dental insurance when out-of-pocket costs are too high, or not having a dentist that accepts one’s dental insurance. Furthermore, for individuals living in states where Medicaid insurance covers dental services, coverage is only available for a limited scope of procedures and not all dentists accept Medicaid. The creation of the dental therapist role seeks to address these two barriers. It has been proposed that dental therapists restrict their practice to underserved areas with few dentists, which aims to address the geographic maldistribution of dentists. Dental therapists require shorter and less expensive training with a smaller scope of procedures compared to dentists, which may allow for lower reimbursements for care than dentists. This could alleviate financial barriers to dental care.

Positions of some of the big players in dentistry
Both ASDA and the American Dental Association (ADA) have clear policies opposing dental midlevel providers. ASDA’s policy on dental providers states “only a qualified dentist should perform the following functions, including but not limited to examination, diagnosis and treatment planning; prescribing work authorizations; performing irreversible dental procedures; and prescribing drugs and/or other medications.” The ASDA position highlights the concerns with quality of care provided by midlevel providers that have not completed traditional dental school training.

The ADA notes its “unequivocal opposition” to non-dentists performing surgical or irreversible procedures in a 2011 ADA news release and strongly opposes any dental therapist or dental midlevel provider models. The ADA comments in a 2012 ADA news release that proposals like midlevel providers will take years to implement and require large financial commitments, and they suggest that these programs will return questionable results. The ADA believes that solutions to the access/cost barriers should focus on providing care now to those already suffering from dental disease, strengthening and expanding the public and private safety net, and brining dental health education and disease prevention into underserved communities.

The American Association of Oral and Maxillofacial Surgeons outlines their policy on dental midlevel providers in an Advocacy White Paper, stating that, “The addition of midlevel providers who have less education and training than dentists will not improve the situation and, in some instances, may actually exacerbate the problem.” The White Paper further describes how comparing dental midlevel providers to physician assistants or nurse practitioners is not accurate and that only licensed dentists with the appropriate education and training should provide care.

The American Academy of Pediatric Dentistry (AAPD) details in a Dental Workforce policy statement that it does not support dental therapists because there is, “Inadequate evidence [that] supports its benefits to children’s oral health in the U.S.” The AAPD believes that resources to implement dental therapists, “Should be directed to existing proven care methods.”

In an older policy statement, the American Association of Public Health Dentistry (AAPHD) advocates for the “expanded use of new and emerging types of dental personnel,” including the Alaska Dental Health Aide Therapist.

What are the requirements to become midlevel providers in Alaska and Minnesota?
Alaska
Dental health aide therapists (DHATs) were introduced in Alaska in 2003 through the Alaska Native Tribal Health Consortium (ANTHC), which is a non-profit tribal health organization that provides health care to over 150,000 Alaskan Native and American Indians. ANTHC sent students to train in New Zealand and they returned to practice as DHATs in Alaska until the University of Washington established a dental therapy training program in 2007. Starting in 2017, the DHAT training program has been moved from the University of Washington to a tribal college in Alaska, announced in a 2016 ANTHC press release. DHATs complete a two-year program, after graduating high school, with rigorous didactic, scientific, pre-clinical, and clinical education. This is in addition to requiring a 400-hour preceptorship under a supervising dentist.

A 2008 study in the Journal of the American Dental Association of quality of care found no significant evidence that irreversible dental treatment by DHATs differs from treatment provided by dentists. The introduction of DHATs has also expanded access to dental care for over 45,000 Alaskans, as described in an ANTHC report.

However, a key point is that the Vermont legislation does not restrict dental therapist practice to underserved areas or to clinics serving underserved populations. The Maine legislation includes several limitations on the settings in which dental hygiene therapists are able to practice. They can work in a private dental practices that serve a population of “underserved adults” or that is at least 25% MaineCare (Medicaid in the state of Maine).

Oregon
The Oregon legislature passed Senate Bill 738 in 2011 permitting dental therapy pilot programs. The Coquille Tribe and the Confederated Tribes of Coos, Lower Umpqua and Siuslaw Indians will have members of their tribes trained as dental therapists and will return to practice in tribal communities.

Which states currently have legislation up for consideration?
Washington, Massachusetts, New Mexico, Kansas, Ohio, and Michigan are some other states that are actively considering or have considered dental therapist legislation.

Timeline of dental therapy in the US
ASDA summarizes the major events in implementing dental therapists across the US, with more information available at: http://www.asdanet.org/midlevel-providers.aspx.

Dental therapy moving forward
The expansion of the dental workforce to include new midlevel provider positions is a highly controversial issue facing dentistry that varies across the US. This article attempts to provide an objective, factual overview of this important topic in dentistry. I encourage you to check out the additional resources below to learn more about this issue, especially the ASDA and ADA resources. Only one thing is certain: MLP legislation will continue to be hotly debated for the foreseeable future. It is vital that we, the current and future leaders of the dental profession, remain informed about this topic and its potential effects on the changing landscape of dentistry.